A question, I know, that for some people is like asking “do you spend much time breathing?

Well, no, not voluntarily….

If you are one of those people whose involuntary reflexes include frequent glances at the infinite trivia generator known as “Facebook,” then consider taking a look at the Fusor Builders group there.

The group is not officially affiliated with this or any other site (so far as I know) but a lot of the membership is similar. 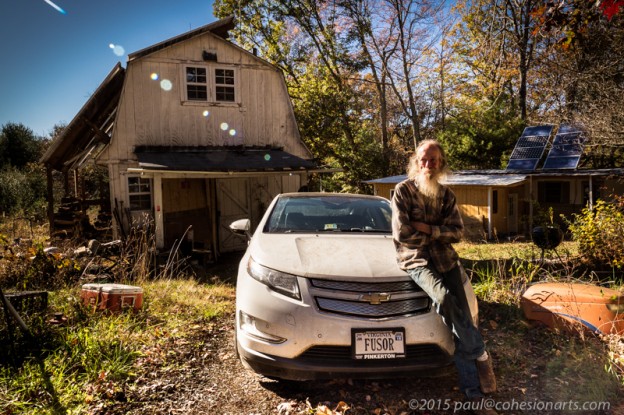 Last week I drove back up to Virginia (I was in Richmond for HEAS earlier in the month) to spend a day with Doug Coulter.

I’ve known of Doug for several years, and have occasionally looked in on his website, where he has made a concerted effort to focus and elevate the “open source” discussion of fusion above the noise that has become an issue for the Fusor.net fora of late.

Doug showed up on my radar again just before HEAS, after I posted this appeal to the Fusor community to, well, get serious about this line of inquiry.  Shortly after that post, I got a message from one of the regular visitors to the site to “have a talk with Bill Fain (another Fusor/HEAS regular) when you get there about Doug…”

At HEAS, I did talk to Bill, who, it turns out, has been working closely with Doug for quite some time on his fusor project, which Doug has been building for several years on his solar-powered, off-the-grid “homestead in the foothills of the Blue Ridge Mountains near Floyd, Virginia.  And what Bill told me got me as fired up about this topic as anything I’ve heard since it first got my attention more than forty years ago.

After talking to Bill I visited Doug’s website, where he has been entirely forthcoming about some recent experiments (if somewhat and understandably circumspect about the techniques involved):

….we made a ginormous breakthrough, actually. We are at approximately 100 billion neutrons/second with under 100w input.

END_OF_DOCUMENT_TOKEN_TO_BE_REPLACED

..chimes in on the story we’ve been following for a couple of weeks, with it’s own story about

This is pretty much old news, finally being reported in the nation’s “paper of record,” so I guess that makes it official:

“The fusion era is here and coming,” said William D. Lese, a managing partner at Braemar Energy Ventures, a venture capital firm with a stake in General Fusion, one of the leading start-ups in the field. “The increase in activity in this space is perhaps a sign of that.”

The statement that I find most intriguing is:

“They just keep pounding on the same dead horse,” said Edward C. Morse, a nuclear physicist at the University of California, Berkeley. “What happens in fusion is that the same ideas pop up every two decades. It’s like a game of whack-a-mole.”

It’s interesting because, while the tokamaks and stellarators and polywells keep popping up… the fusor that we’re experimenting with here just stays in its hole.

…it’s on the cover of TIME Magazine this week.

I discovered last night that the cover story of this coming week’s edition of TIME Magazine (dated Nov 2, 2015) is all about the quest for fusion – which is suddenly a hot topic now that it’s starting to attract all kinds of Silicon Valley, tech-titan, and VC money.

Unfortunately, the online version of the story is behind TIME.com’s paywall.  They don’t even let you view a limited number of articles per month, like most digital versions of legacy print media (like the New York Times) do.  They want you to subscribe for $3/mo to read the one article.

Well, pardon me but… fuck that.  Here’s a PDF of the story you can download and read at your leisure:  Time_Fusion.pdf. I suggest you save the article to your own hard drive lest some lawyer for TIME insist we take the link down.

There is some deliberate, conscientious rebelliousness to this act of digital defiance.

Those of us in the “Open Source” fusion community – on this and other sites – adhere to the conviction that, once achieved, the knowledge that makes fusion possible needs to be freely circulated.  It cannot be become the property of any single capitalist enterprise or consortium. It cannot be monopolized like fossil fuel production and distribution.  It should not be any more “proprietary” than that other form of combustion – you know, fire.

So, at the risk of defying the gods of digital commerce, this story is being made available to the “open source” fusion community here.

There’s been a lot in the cultural firmament this month about the second “Back To The Future” movie – the one where Marty and Doc Brown fly in the DeLorean time machine – now powered by a “Mr. Fusion” reactor – to the date of October, 21, 2015.  They arrive at a time where not only fusion power is a reality, but the Chicago Cubs have finally won a World Series.

So much for the predictive power of 1980s cinema.

So that was on my mind when my daily, multi-source info-feed delivered this article from LinkedIn:

ITER Is Not On A Commercially Viable Path – by Dr. Matthew Moynihan (on LinkedIn).

And what immediately struck me about the article (before I read it, of course) was this illustration that accompanies it:

I’ve been critical of the whole tokamak approach to fusion on the grounds that the approach produces massive, incredibly complex machines could fill a gymnasium.  I only arrive at this obviously negative (and perhaps ill-informed, since I’m hardly anybody’s idea of an expert) bias because my introduction to the subject comes by way of the Farnsworth Fusor, a device that sits on a table top.

Now comes the world’s joint effort to demonstrate magnetic containment – yes, another ginormous tokamak, only this time the largest one ever built, on a scale several orders of magnitude beyond anything that preceded it.

And just look at this photo of the campus that will house this behemoth.  My god, it’s not a gymnasium, it’s a whole fucking city!!  For one experimental reactor!!!

The  article makes a pretty solid case for why this project is little more than a monumental money pit.

Clearly ITER itself will never be commercial.  Supporters will argue: So what? ITER is a government experiment – not a commercial product – the next machine will work.”  There are several evils in this logic.  First, if you admit that ITER is not on the commercial path then stop treating it like it is.  Fund this experiment appropriately along with other experimental options; but do not risk everything on ITER.  That is a bet we already know will fail.  Secondly, delaying the change pushes the world into more dangerous climate realities, with a fusion option further and further away.  This is a dangerous path and it must change for humanity’s sake.

So, yeah, it’s frustrating to see countless billions being poured down a rat hole when smaller scale projects don’t get serious consideration.  There is a mentality around this research that says “it has to be big.”

But that’s the mentality that governs the whole field.

And that’s what needs to change.

I have been taking exception lately to the notion that “Fusion is the energy of the future and always will be.”

For starters, while the line is clever verbiation (don’t bother looking it up, I just made that one up), it is also something of a self-defeating prophesy.

As the protagonist (who just happens to be a dog named “Enzo”) in the novel “The Art of Racing In The Rain” is fond of saying, “that which we manifest is before us.”  In other words, if that’s what you think is true, then, well, by golly… it probably is. For you.

But I get where such skepticism comes from when I read an article like this one that showed up in my Google Alerts (“nuclear fusion”) this morning:

The magnetic fusion device, tokamak, has been a focus for extensive research the world over, and will emerge as the energy option of the future by 2050. Tokamak aims to determine the economic and technological viability of using fusion energy to greater effect to produce electricity.

Did I read that right? “…will emerge as the energy option of the future by 2050…”? Well there ya go, it’ll be in the future… in the future.

Since so much of the research in fusion is devoted to tokamaks, I begin to understand where the attitude comes from.  Whatever their “potential,” tokamaks are so complex that it seems doubtful to me (admittedly a marginally knowledgeable observer) that they will ever achieve “economic and technological viability.” So yeah, sure, maybe the Tokamak will prove viable in another 35 years. Never mind that we’ve already been working with that approach for 50…

Perhaps more revealing is the statement that opens the article:

I think that tells you all you need to know about institutional magnetic fusion projects.  They’re not about energy.  They’re about prestige.